I watched the first episode thinking it would be the new ride of my life; I left after the third. 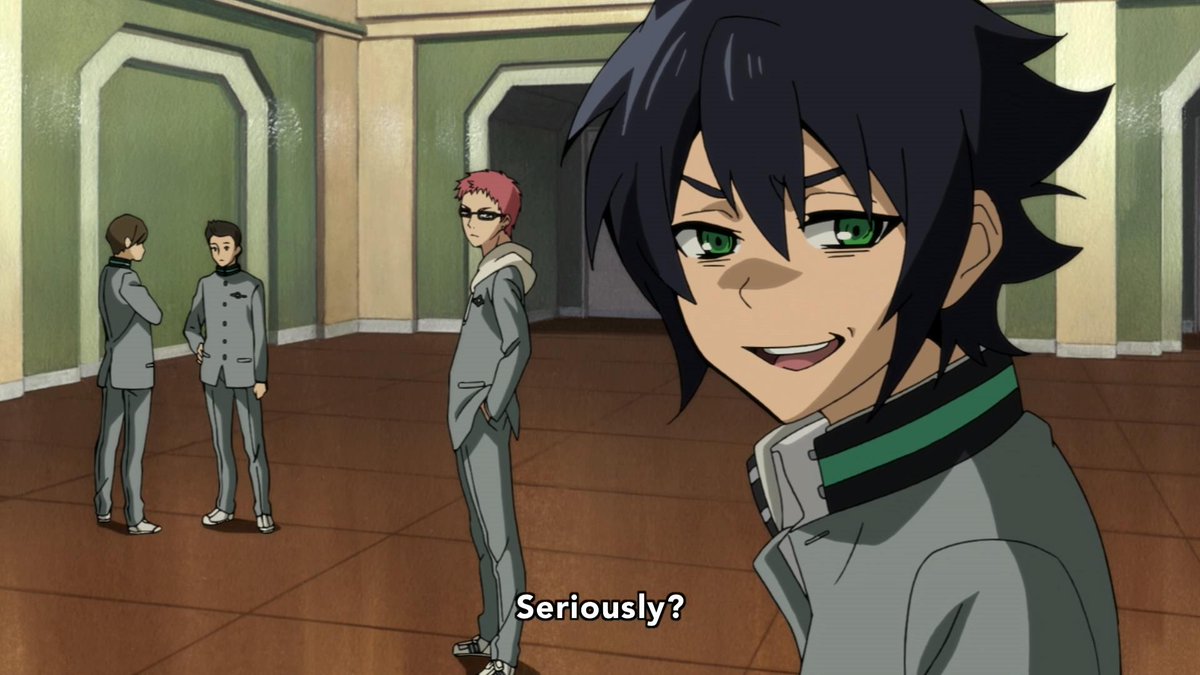 Despite the amount of time I spend scanning the internet for ways to burn the time I’ve already wasted, I’m quite particular when it comes to deciding whether or not I want to watch a series, especially if it’s currently airing. I’ve dropped shows that aired long ago in the past, but I make sure to acknowledge that there will come a time when I may revisit them and give them more thought. A show currently airing, however, is a show that’s trying to take my attention and make me look forward to the next episode. So when I see a new episode available of, say, Seraph of the End, and think ‘meh’, and my attention is drawn to something else that’s appeared that week or another series from however many years ago that I’m watching, that usually means the show gets dropped. I always have something better to watch.

I mention Seraph of the End because, despite a lot of the support it’s getting, it’s been my biggest let-down of the season. Granted, I stopped after the third episode. But that’s my usual threshold for giving up, and also a show’s usual threshhold for telling me whether I want to invest my time and energy in caring about it. The main issue was simple: just as Twilight and The Hunger Games ‘inspired’ fiction that bucked their respective trends (to the point that books had stickers saying things like ‘100% Better Than Twilight’ or ‘Liked The Hunger Games? You’ll LOVE This’), Owari no Seraph seems to get all it’s positive aspects from the manga-sales-booming giant (excuse the pun) of Japanese media, Attack on Titan. The difference between the two? Seraph takes everything that made it’s predecessor triumph and tramples on it with a 60-metre-class foot.

Let’s start with the characters; here we have a young boy who used to live in fear and subjugation of the ‘things’ before his family is taken away by the ‘things’ and thus vows to ‘destroy all the things’. He then grows up and joins the group that aims to ‘destroy all the things’, and – in typical storytelling tradition – may just be the only hope of ‘destroying all the things’, both for his good and the good of all mankind. Of course, in order to ‘destroy all the things’ he has to be reckless, defying the limits of the group that have been around much longer than him but obviously won’t be able to succeed without him, and to that effect we need a character who will continually remind us how heroically reckless he is by telling him not to do something before he ends up doing it anyway and consequentially saving the day. It would be okay if said companion was not the only female of the three, à la Mikasa, leaving our male companion to be the guy who likes to try hard but gets beaten up and overly scared about things, meaning that we get to see our hero be even braver in response to his lack of initial heroic bravery. So we have an almost immaculate clone of Attack on Titan’s lead trio.

Next, how is our main character going to ‘destroy all the things’? How do our heroic group set about ‘destroying all the things’ and reclaiming this typical dystopia? With oversized weapons that are also sinister living beings, of course!

I’m not that good at sketching, but I know when and where to draw the line. From the first episode we saw the incredible speed and power of our enemy in the slaughter of the innocent children – it hit me like a sledgehammer, like the show was suddenly waking up and saying we mean business. I was expecting, as in Attack on Titan, for the heroes to fight with similar emotional realism (would you dare to strap on some Vertical Manouvering Gear?). But a few episodes down the line, and we’re doing everything we can to forget how independent and awesomely underived that slaughter-fest was and, instead, giving our heroes their own nice shiny toys with which we can sell merchandise. OMG! Look at my scythe! Aren’t I the coolest totally-taking-the-show’s-premise-seriously girl evah!

It’s the equivalent of the toy-deal characters that feature in the Big Hero 6; they’re all just there for show, and the themes we could explore are the same that have featured in countless similar stories; weapon could overpower hero, weapon uses hero’s inner darkness and memories, hero fights against inner darkness and memories, hero wins and overpowers weapon, big whoop. Oh, and we’re also going to call them demons, and there are also giant monsters, because we’re playing a game of Chubby Bunnies where the marshmallows are how many shounen action tropes we can fit into one show.

It all felt so patched together and forced – throw them into a school, why not – that I realised that what I was enjoying while watching Seraph was in fact it’s predecessor. It’s not like the first episode’s expectations, and the lack of fulfilment of them, were what put me off; it was the feeling that the show was taking my time while I was getting nothing interesting or entertaining out of it, since I’d already got what I could get out of the countless shows it had drunk the blood from.

If someone can point to something exciting in the second and third episodes that I missed, I might be able to replace the hollow feeling that remains from not stopping sooner. As it stands, however, Seraph appears to me as merely a vampire thirsting after other shows while remaining a dead husk itself.