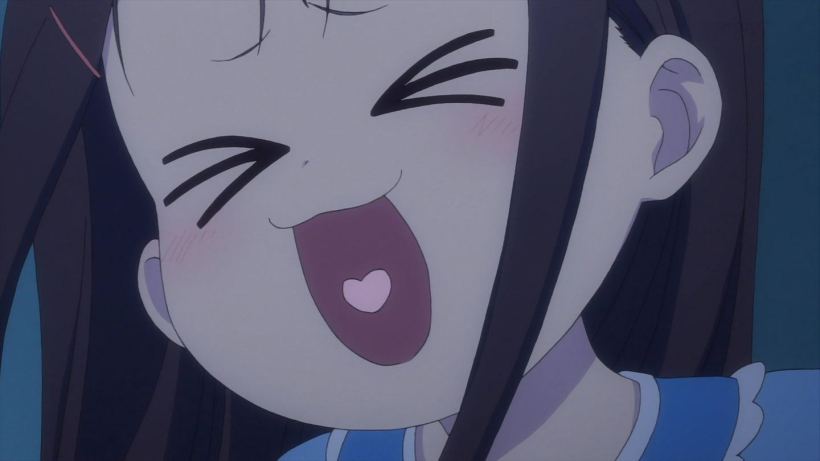 Good grief, Maeda sure can pack a lot into twenty minutes. With Takajou causing mass destruction in the cafeteria, Tomori leading the hunt for a pervy power-user and a delve into the class president’s tragic past, there was something for everyone in this week’s episode (even if you’re just watching it to play Jun Maeda bingo).

I loved seeing Tomori take centre stage this week. A lot of people were concerned that she’d too quickly turn into a typical Tsundere, but’s she’s already breaking that mould by accepting that there’s ‘nothing worth hiding in the end’ and immediately showing multiple sides to her personality, which became more apparent the more time Yuu spent with her. Seeing her cute side emerge in more serious situations – being threatened, going to see her brother (who had previously and fittingly killed some of the episode’s happy-go-lucky mood) – stood out as strong writing for a character who could otherwise be too easily pidgeonholed. She’s a conqueror of the severity of situations, achieving things through hard work and emotional integrity. Her isolation could have also been a predictable path of character development, but having her break etiquette on the express train helped to show how she’s happy to remove herself from the social norm in order to be personally fulfilled. This stops the story from being a question of whether she’ll ‘make more friends’; we’re on board with her not having them if that’s the space she wants or needs.

In true Maeda tradition, though, it was her backstory that stole the show. The horrific experiments on her brother were powerful messages of the importance of Tomori’s quest, stopping us from dismissing these powers as just comedic fuel. What I enjoyed the most about this development it wasn’t a ‘tear-jerker’, but rather a different kind of intensity; a kind of righteous anger that extended through every moment of their time together, especially against the gorgeous visuals that her brother – what remained of him, at least – couldn’t appreciate. It made me connect more to Tomori’s strength at handling this awful family situation, being so much more adapted to it than Yuu and the viewer are. Through it all, I felt myself connecting to both her and Yuu, on top of what I felt for her brother, and making me empathise so strongly with multiple characters simultaneously is an incredible feat in any kind of storytelling.

I’m also praising this episode for further developing the rest of the cast in and around Tomori’s backstory. Ayumi framed the episode with her sweetness, which Yuu still gets repulsed by, but underneath that was his protectiveness of her that emerged from learning about the nightmare Tomori went through. Likeiwse, it was great to see him immediately fit into a supporting role for dealing with the ‘thoughtographer’. Nothing feels forced about the ways that Yuu is revealing his own multi-sided personality. As for Takajou, the potentiality for links between his ability and his personality was furthered by how he could fine-tune his ability when someone else depended on it – the arrow – even though he said before that it would always be haphazard in the hilarious cafeteria scene. Charlotte uses both comedic and dramatic moments and brings them together to make its characters shine.

We also got more opportunities for scope than I for one know what to do with. I would have never thought of ‘thoughtography’, so what other interesting abilities will the show introduce over time? On top of that, the drenched assistant who introduced that word implied a scope of their operations that I’m excited to see unfold. The portrayal of human experimentation is certainly a threat that can’t be forgotten, while the mysterious benefactor – assuming it’s not Charles Xavier – is also a character I’d love to see be more than just a convenience to Tomori. Being the one person she trusts, what would her world turn into if he turned out to have ulterior motives? And what’s the signifance of Ayumi always stargazing and talking about comets? I’m often more interested in tying together themes and symbols in what I watch, but this show’s plot at its most basic level has got me hooked like no other this season.

Another reason I’ll be excited every week is the show’s fantastic art and direction. Could anyone follow Yuu into that student council room without marvelling at how impressive it looked, even though it was really just a much of bookshelves and furniture that looked nice in the sunlight? That small touch was all I needed to fall in love with that location, giving me flashbacks to how Time of Eve used camera angles and lighting to make its titular cafe inviting to the viewer. The OP – at last, the OP! – was also dazzling, though I doubt it’ll be heralded much after the show’s finished its course. I would have liked a more animated ED, but the song more than made up for the unengaging credits.

If last week was an invitation into this exciting world of pubescent powers, this week was a warning – for both Yuu and the viewer. As much as I’m looking forward to the comedy that always arises from from the characters using their powers, this fantasy dynamic is ultimately an incredibly serious affair, one that seems surround by a theme of adults – the mother, the scientists, Yuu’s own estranged parents – being disconnected from children and making their lives worse.

Yusarin didn’t make any more advancements towards the main cast this episode, so I expect she’ll emerge eventually. I look forward to how her own backstory will complicate this world of children being used as ‘batteries’.

For an anime with ridiculous abilities and a typical high school setting, Charlotte manages to feel more ‘real’ than anything else I’m watching this season. It gives me hope that Maeda will continue doing what he does best in making the feels in his shows so much more meaningful.