Some great developments this week for everything I’m watching! Boku no Hero and Kiznaiver are rewarding viewers with a good memory for little plot points you’d think would have been forgotten, and Flying Witch reminds us of how important our imagination is as we watch our way through all these shows.

Also, I’m thinking of getting up to speed with Re:Zero to see what all the fuss is about. A lot of different opinions flying around and I can’t care about any of them until I’ve sat down with it and judged (and hopefully enjoyed) it for myself. 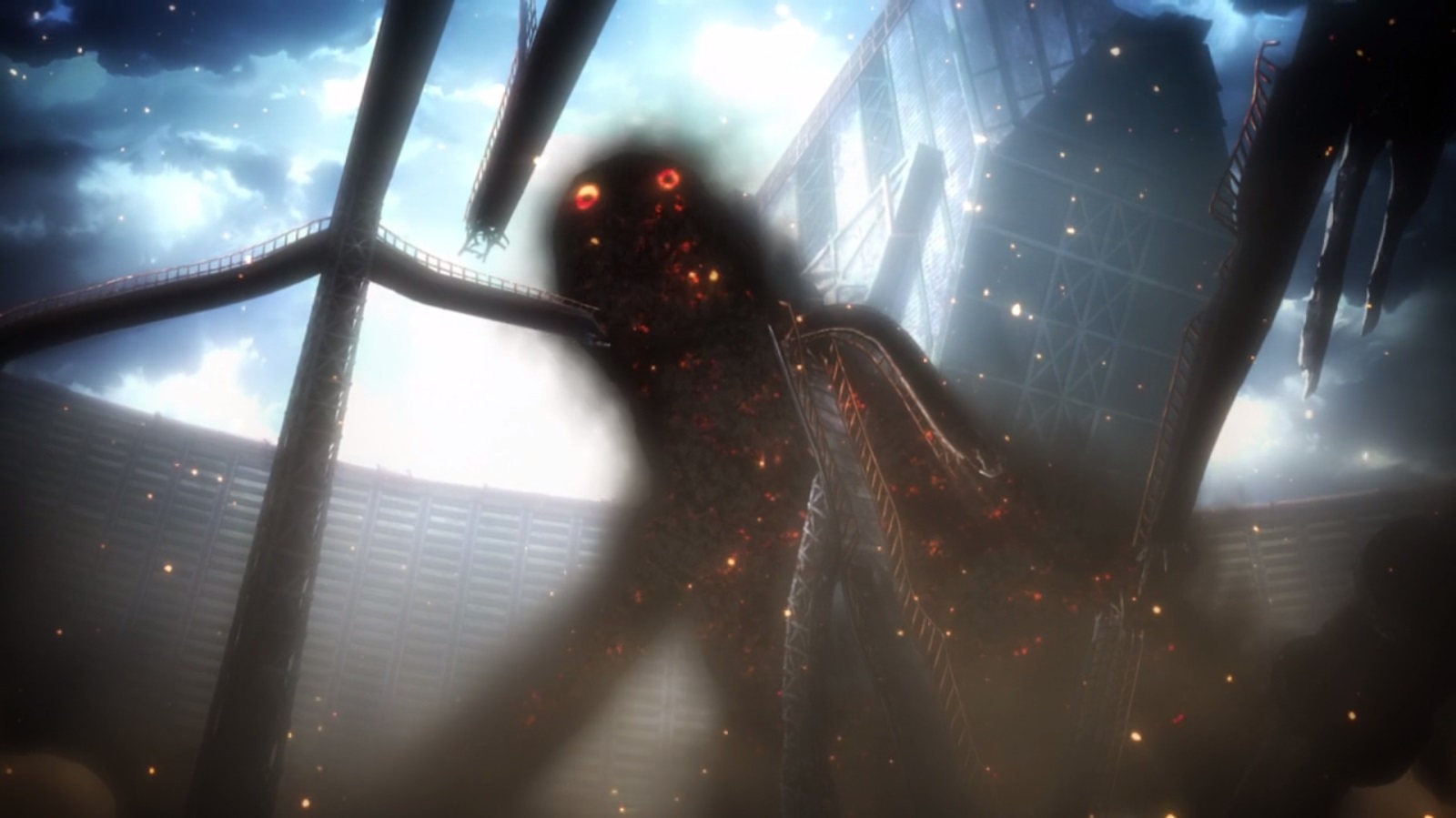 ‘Mumei Jenkins’ seems the top of her game, but strength becomes weakness if the pressure gets to you and you use it too recklessly. Her backstory, a service to this ‘young master’, make her far more unstable than before. And word of the Shogunate arming themselves to kill their own side speaks volumes of how the human elite are growing to be the real enemy here.

It’s brilliant how Mumei contrasts with Ikoma’s resoluteness. He’s fighting for himself and his bitter vengeance, but all Mumei seems to run on is the need for her to be a mindless killing machine. Isn’t she really becoming more Kabane than Kabaneri?

And we end with a monstrous amalgam of Kabane; proof enough that these monsters have more strength in community than the people they sink their teeth into.

Chidori’s heavy. Her heart is heavy. But what ways her down is how down-to-earthness, how loving and caring and connected she already is to everyone. She’s bringing Agata’s caring side out and everyone having to find her is really just to parallel what the Kiznaivers are all searching after.

I’m in love with how Kiznaiver takes things you forgot and revitalises them as you watch. The teacher’s joke about illicit affairs gets a second, fantastic outing to interrupt Maki’s advances. The whole narrative of Agata’s money being stolen isn’t forgotten either – it’s integral to the emotional weight of this episode.

Kiznaiver is not only tearing down the types of anime. In all its bizarreness, in the place of cliche, it’s bringing to life a heightened sense of realism too.

Deku may be the underdog, but his humility only keeps growing. He respects Kachann, and that respect gives he the edge he needs to counter his attack. Kachann, underestimating Deku, still relies on surprise outbursts of strength. But Deku, in all his struggles, is more aware, and more self-aware, of what he needs to do to win.

He remembers Ururaka’s redefinition of his name  a reminder itself that you can turn any label against those that string you up with it. A boy once useless is now filled with resolve. Will Kachann, filled with confidence until now, have his own change. If he can’t be the top hero, could he be on the path to villainhood instead?

Aizawa’s ruse, and the ruse beneath it that All Might unpicked, kept up UA’s whole focus; that you can suddenly change the fates and minds of men. Children can become heroes, the world saved. But perhaps heroes can become villains too.

A wonderful double-take on the meaning of the magical and the faux-marvellous this week. Chinatsu reads a bunch of silly meanings into Chito’s antics and what she encounters along the way, but is she really wrong at any turn?

The experience of chasing after the cat is her imagination running wild; we too should know that, whether any ideas we have about a show are right or not, it’s how much we enjoy it that matters. And we can add to our enjoyment by being more active, chasing after curiosity, not knowing where we’re going but appreciating every moment how we want to drink it in.

Watching the journey of another person through what we read meanings into should only heighten the fun of both adventures. Else we’ll never get to that golden stage where we’re old, happy, and still smitten with the magic of storytelling.

Two perils of the ‘offline’ world get our attention today; how quickly it reaches an ‘end-game’ where everyone thinks they’ve peaked – youth – and how the bosses it throws at you – tests – can be far harder to cope with than any giant minotaur.

But Rusian really does love Ako; he’s not trying to live in a fantasy with her, but rather he’s treating their life together, online and offline, as a reality, and looking after her priorities. It’s important that this prefaces the show’s greatest bathos to date; Ako’s ‘rejection’ of Rusian’s confession with some majestic cinematography to boot.

The reveal after the ending credits, that she considers girlfriend a ‘demotion’, laughs and smiles with Rusian’s attempt at securing a real relationship with her. A fantastic false cliffhangar that had me laughing for ages afterwards.

And Rusian has a sister!

That’s all for this week! See you next time!