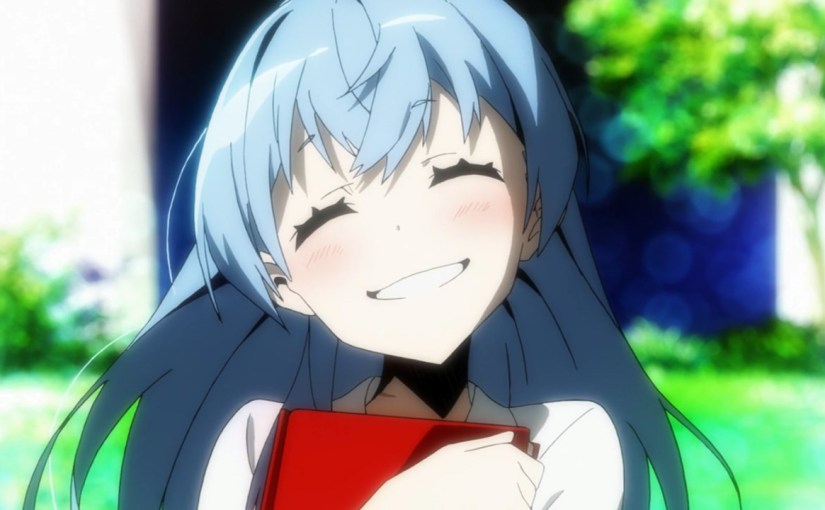 Damn this post is late, but at least my first year of university is over now! Exams out of the way, all that remains to test is the quality of this season as it draws to a close.

The verdict?  As much as hype can get in the way of a fair criticism, the excitement I have for every show this season is so obviously deserved.

A round of applause for the presentation of this villain. While all sorts of heroes have had fun little freeze-frames declaring their powers, the shock when we see his quirk instills a real fear in him and his madness. His genetically-engineered friend, on the other hand, is the perfect ‘nurtured’ counter to All Might’s powers that rest in collective ‘nature’ of human strength across time. Science versus the fundamental strength of humanity.

The creativity and teamwork of our heroes in their victories continues to triumph over the villains’ reliance on their individual talents. It only makes me fear more for Bakugo though. Even though All Might is a lone ranger, he repesents the unified hope of humanity. Bakugo, heading off to take these super-villains head-on, may bite off more than he can chew.

We’re sure he doesn’t want to get ‘saved’ again, by Deku or by All Might. But I don’t see him getting himself into anything but trouble next week.

Biba’s hoarding of resources and technology may well be a direct product of the supplies that he was denied in the past. ‘His Mumei’ is just technology, a machine. His world is just steam-work, powered by the strength of the Kabane in the bodies of men, completely bent to his will.

So the mortal flesh of men doesn’t matter. Their lives, their freedom, doesn’t matter. Ikoma staggering towards Biba, in the agony of the death of his friend, is the struggle of life against this overwhelming force of the subtraction of life from the world. Once again Ikoma is cast from a train, even though Takumi thinks he’s taken the bullet for him this time.

And so begins the parallel from the first act in this finale. Now Ikoma will do the opposite – instead of getting a train in, he will have to stop it. He’s alive, we can be sure. But this time it’s not trust that he’s earning. It’s revenge.

The connections lasting after the Kizna is gone: Nico can be friends with those she’s loved her time with, but Chidori and Tenga can’t connect even if they had their bond of pain. The children of the first experiment weren’t left bonded – they were disconnected from reality, like Nori is now, in her numbness. That smile she once had – the God of all smiles – gone. It’s peace, sure. Peace like a graveyard.

Trigger’s use of colour never ceases to amaze me. All this drabness of the victims of the Kizna experiment, and of Katsuhira, speaks volumes against everything the experience of pain is – colour. They wanted to divide pain so it wasn’t felt, but ended up draining everyone of their lives in the process, whether they felt none, or too much. And now they’re trying again; now they are equally sharing out the pain, a multiplication of it. And that has made these lives more colourful.

Katsuhira beats Ikoma for the best emotional breakdown this season. The pain he felt was so subliminal, so in his very and being. A terrible beauty to behold before the credits rolled.

It’s hard to talk about anything other than the link between magic and nature in this show, but the way each episode explores it different always puts a smile on my face. Nao’s cooking trials show how a calm procedure can overcome anything, but that it’s easy to miss the fundementals when you’re focused on the details.

From cooking food to growing it: amazing how Makoto is amazed at the view above the trees when she’s a witch. Flying should be her game, but she’s still impressed by the elevation a tree can give her. Now she’s joining with Chinatsu’s carefree spirit, rather than Chinatsu always following after hers. And the little conversation about ‘ninja witches’ brought Kei into that too.

It’s easy to think ‘nothing happens’ in this show, but the character development is subliminally astonishing.

The excitement of a new arc looming fills this episode with more energy than it’ll get on a rewatch, for sure. But the ride is still thrilling. We kick off with a full narrative of the twins’ backstory, and it’s a fantastically paced, gripping vingette that helps us fully define everything we’ve been wondering about these two up until now.

Rem wants to have everything rest on her, to make everything balanced, to answer the guilt that she’s the one left with her horn. Doesn’t this remind us of how Subaru wanted everything to rest on him, overworked himself, and needed Emilia’s leap of trust in him in the end to convince the twins that he was trustworthy? It’s wonderfully ironic that Subaru is now the one giving that lesson to Rem.

It hopefully foreshadows, as we enter the next arc, more and more autonomy for Emilia. More of her saving Subaru’s ass and not always the other way round. And we’ve only got more mysteries to play with now – who were the figures who burnt the village to the ground? What is Roswaal really after? How awkward will Subaru be on his first date with Emilia?!

I begin by worrying this whole siege business is too much of a distraction from Ako’s growth. But she ‘levels up’ through it; through taking a defeat to heart rather than running away from it. She’s gotten to the point where things don;t have to be signposted as projects for her development in order for her to develop. She’s beginning to live out reality more the way one should.

Still, the maid cafe is a distraction, and not just one from the plot. After having this ‘development’ of Ako pointed out, we go back to her having not done the work she she should have and hiding behind Rusian’s eternal wisdom again. Rusian’s plea for help was humble of him, but it would have fitted in with the episode far better had Ako somehow done it herself.

The distinction between good and bad pro-players and the different kinds of ‘fun’ they play for was welcome, though. Netoge doesn’t just use the virtual to make a fun and still unnecessarily ecchi story; it uses it’s story to talk about things in the virtual too.

That’s all for this week. See you next time!