It can be hard to find video game characters that speak to the player as specifically video game characters. Many collections of polygons given lines of dialogue are simply an attempt to capture a cinematic figure. Games, as a medium, are about interaction. Dialogue trees and skippable side-quests can give the player the feeling that they are actively choosing to develop one character over another, but it’s rare for the entire gameplay experience to function as a method of constant characterization. We shoot the bad guys, we collect the secret items, and we wait until the next cutscene or dialogue snippet to get more of the story, and more ‘flesh’ for our cast.

It doesn’t have to be this way.

After being first announced at the 2015 Game Awards, the trailer for Psychonauts 2 was dropped at the same ceremony this year. The sequel reached its crowdfunding goal almost three years ago, after fans of the original flocked to support the development of another deep-dive into Tim Schafer’s world of psychic agents and conspiracies cultivated by milkmen.

Psychonauts is a game about dealing with peoples’ dark secrets with the directness of literally invading their minds. The title was initially a commercial failure, but a venture into digital distribution saw sales skyrocket for developer Double Fine. Now considered a cult classic by most of its playerbase, and with a sequel on it’s way, it’s worth revisiting how Psychonauts enraptured players with its use of level design and player agency in constructing its characters.

The original game gives players control of Raz, an circus runaway and uninvited attendee of a summer camp that sought to develop those with psychic abilities into agents that would use those powers for good – the titular ‘psychonauts’. Aside from the game’s hub-world of the camp, every ‘level’ takes place inside a character’s mind-world. Exploring each world means delving into the depths of each key character’s personality, history and horrible imaginings.

The training level takes place inside camp leader Coach Oleander’s brain, an assault course called ‘Basic Braining’. The harshness of this ‘basic’ test for new campers at Whispering Rock communicates to us many facets of Oleander’s own character; primarily how demanding he is on himself, which becomes more important as he is revealed to be one of the villains of the story. The level is little more than a collection of loosely stitched-together episodes of his supposed military service, with some sections connected so crudely that gravity is suddenly distorted in order to re-orientate the player into a new plane of psychological space.

Psychonauts sets up a contrast between Agent Nein and Oleander, good and evil mentors, though the stark difference in their psyches. Sasha Nein’s is so tightly controlled, every thought and feeling is packaged neatly into a single unremarkable cube. But as Raz’s psychic training with Sasha goes haywire, the repressed memories of Sasha’s childhood are uncovered – literally, as different faces of the cube transform to become mini-stages resembling different aspects of Sasha’s early years. This is also the first time a link between psychological place and characterization is firmly emphasized by the player’s interaction with the story, making the cube of Sasha’s mind not only serve as a training ground for Raz’s psychic abilities, but also as a manual for how later minds encountered in the story should be read.

Milla Vodello’s mind serves as a balance between the other two psyches used for teaching Raz, and the player, how to proceed deeper into Psychonauts’ story. It has the adventure and excitement of Oleander’s, while also having a degree of security similar to Sasha’s, taking the form of a dance club, a curated space of free expression that’s also a foil to Sasha’s overly scientific mind. Milla’s psyche is uniform in its bright and bouncy aesthetic, showing that Milla is in control of her creativity to a great extent. But if the player has a penchant for scouting every nook and cranny for secrets, they will find a crack in Milla’s defenses.

Many of the ‘secrets’ of characters whose minds are explored in-game are stored in vaults that hop around like frightened animals in particular places of their mind. Once opened, these vaults give a series of images that quickly tells a story of that character’s past. Oleander, for instance, has his ‘shame’ of never actually serving in the military secured in such a way that no camper could find it while doing his basic braining course, as they would lack the equipment needed. The player can however revisit the stage with the Cobweb Duster needed to access this vault: moreover, while completing ‘Basic Braining’ for the first time, the player will run across an easily-accessible vault filled with memories of ‘Oleander’s Pride’, false visions of him being a model soldier in the army. Even when we’re exploring someone’s psyche with supernatural powers, we have to look beyond the surface, and not simply trust what we think we see.

In Milla’s case, the seclusion of her darkest secret is different, and irrelevant to the larger plot. Taking a detour in a particular room of her ‘Dance Party’ mind-world brings the player into a small room with a bouncing vault and fragments – static collectables in every level that depict crude images relating to the host character’s psyche – of little children. Immediately upon entering, Milla asks, ‘Now why would you want to come in here? Come on this room’s no fun, let’s leave baby’. While warning you not to delve into her memories, she retains the carefree register she’s always used in the game so far: the issue is with the absence of ‘fun’, a concept that the rest of her mental space is established upon. Opening the vault yields her memories of caring for an orphanage, and one day returning to it engulfed in flames. 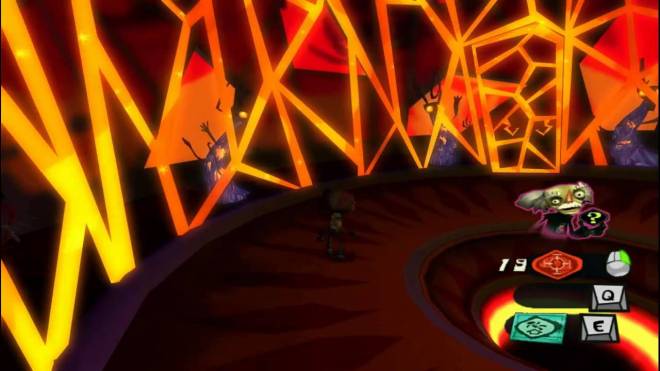 Particular to Milla’s secret is an extended physical space: while characters’ pasts are generally tied to objects that can be collected in order to ‘100%’ the game, it is possible to go deeper into what Milla wants to hide at no benefit to the player whatsoever (at least in the original game, before external achievements were added). A foreboding box stands in the corner: smashing it open, the lid flying upwards, Milla says, ‘Now you definitely don’t want to go in there. That’s a party killer’. Jumping in takes you to a glowing cage surrounded by eight of the game’s ‘Nightmare’ boss enemies. While these creatures cannot attack the player, they whisper-scream ‘why don’t you help us?’ and ‘you let us die’ : they embody ideas of the children Milla had to helplessly watch burn.

The voice of Milla scolds you for your trespassing, explaining that it’s lucky that she has her nightmares ‘under control’. The experience of the burning orphanage forced Milla to construct a layered structure for containing what could mentally scar her if it roamed free. The Nightmares are only encountered in some of the more unstable minds that Raz visits later in the game: they drag the player suddenly away from where they were and into a hellish arena that the player can’t escape from until they win the fight. Yet,the player only fights a few in the entire game, and only one at a time. Milla’s ‘Dance Party’ hides eight of the monsters away, which demonstrates to the player the incredible level of power she has over her own mind, even if the majority of it seems carefree. 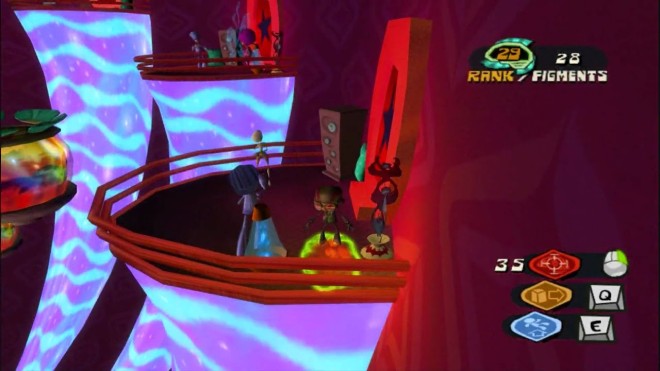 The location of her secret and the addition of a contrasting physical space to the memory vault the player can only enable the player to have their agency deeply rewarded: going out of their way to find something terrible about Milla, they also find something that affirms her greatness. She made a cage that would not only contain them, but also allow anyone who found them to safely empathize with what it’s like to be tormented by your past. No matter how bad a memory is, we should never lock it away forever. Others may need it to understand us fully. We only need to have it under control.

The ‘training’ levels of Psychonauts do a lot more than merely teach the player how to get to grips with controlling Raz. Each mind explored forms its own story, which builds into the larger narrative of gearing the player up for delving into far more volatile minds in order to progress. Psychonauts is one of the few games I’ve played that believed it ought to teach its players how to better approach and understand the thoughts and feelings of people while they learned how to play the game in a more conventional sense. That’s why I’m excited for a second installment: while Agent Cruller has always been in the player’s head, ready to give them a hint if they’re stuck, we’ve not yet been able to enter his mind yet. There are so many more mental disorders that the team at Double Fine could help shed light on through their storytelling.

Knowing how much I resonated with their treatment of Milla’s tragic backstory, I’m sure they’ll do a great and respectful job with whatever kind of psyche they put their minds to.

If you want to support the growth of UEM!, please consider donating via Patreon! All money goes towards essential equipment for making new kinds of content. A Patron-only podcast is coming soon!