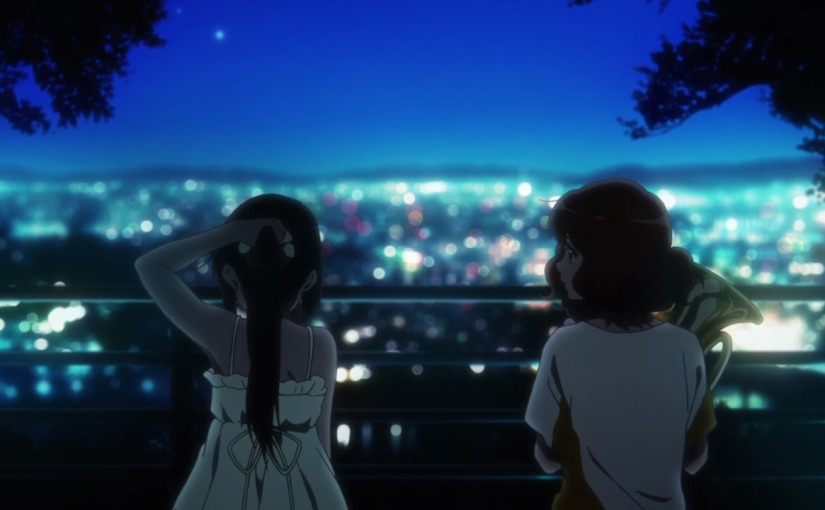 I’ve been wondering about something after reading this article; there’s been a lot of talk on the current issue of ‘Yuri Bait’ in Hibike!, and I’d like to share my thoughts on it as the next episode nears.

Thing is, I’ve heard a lot of people get angry at the show and/or KyoAni for ‘baiting’ certain viewers into thinking a homosexual relationship would be canon before using one scene to ‘undo’ all that and make it ‘mean nothing’. That or people are saying it’s a further sign of the marginalization of homosexuality in popular media. There are, however, a number of voices that are appreciating this development for what (I think) it really means for the show. When you properly evaluate the relationships of the characters, the scene actually becomes a boon for the potential Yuri-relationship sub-plot.

First, we should see the relationship between Kumiko and Reina for what it really is: liminal. Kumiko’s mind isn’t focused on feelings towards guys, supported by the female-dominated cast and environment and her coldness to the only boy she seems close to, while Reina is unafraid to throw around words of ‘love’ and implications of deep connections. It’s simultaneously the right set-up for a friendship that explodes the less vibrant character into a new experience of youth (as in Hyouka) and perfect as the non-romantic prelude to an actual romantic relationship, offering meaningful ground for their proximity to become something deeper. KyoAni seem perfectly aware of this, as they dedicate time to flesh out both sides of this same coin. Reina may have blown her ‘straight trumpet’, but Kumiko is far harder to describe, enabling her character to go in a number of directions and face all these conflicting developments at once.

The last few episodes, however, threw some remarkable challenges. Shuichi’s advances have rung alarm bells for people who don’t want a poorly-written Kumiko x Shuichi ending (since the show has rarely touched on any romance between them), while Reina’s confession has made Yuri fans outraged at episode 8’s incredible scenes being merely ‘bait’. But what rings true about both these things? They’re conflicts, and this is a dramatic show about conflicts. That means these issues are developments of each sub-plot.

Shuichi’s increased demonstration of interest in Kumiko and the teasing she receives are conflicting interests; she clearly isn’t ready for that kind of experience, and neither does the viewer want her to fall down that typical path of passive realization to what’s been actively going on around her. Reina’s confession is also a blow to the potential for her and Reina getting closer, but it’s also an obstacle to a sub-plot which is as much at threat to disruption as anything in the show. The Yuri ship should still be sailing – it’s just hit a storm, which makes it more exciting. That, in my book, makes this show stand out as something making progress for homosexuality in romance, making the potentiality for it matter to the development of its characters.

The latter is the primary issue. The rumours regarding Taki-sensei and Reina are going to bleed profusely into the next episode, and I can expect that her deeper feelings are going to get mixed in with the drama – perhaps exposed more greatly – leading to her feelings being affected by whatever unfolds. The fact it’s a teacher-student relationship speaks of its fragility, as the two have completely different goals – Taki-sensei is engaged with bringing people together, while Reina rejoices in isolating herself as ‘special’. This only seems to me as a further opportunity for the homosexual sub-plot to develop, which in turn will run alongside and affect the development of the Shuichi and Kumiko sub-plot.

I don’t think either path is going to come to a head; Kumiko’s development isn’t leading her towards Shuichi – the potential for romance there is just another of the challenges that are developing her in the ways that matter. Likewise, the development of Reina’s feelings towards Taki-sensei and Kumiko’s pseudo-romantic proximity to her will be another cog in the wheel. The point is not who gets together with who, or what that means for how relationships are portrayed in anime, but what that means for the character individually. The depths of a character – particularly those as deep and natural in this show – should come first over the desire to see two characters together in some way or another.

If KyoAni does somehow make a relationship absolute in this series, I’ll start playing the Euphonium myself. It would hopefully help to clear my confusion as to how and why the series ended that way. As it stands, though, I think Hibike!’s first season is exploring the liminality of youth and, consequentially, won’t be making any ships canon, desired or not.

15 thoughts on “To Yuri or not to Yuri, that is the Euphonium”