We’re past the midpoint, and while some of shows are clearly laying out their goals, others are still playing hard-to-get. But the latter should mean more surprises. Good surprises, I hope.

And speaking of surprises, I’m now covering six shows in this feature. Though Re:Zero gives me enough to talk about each episode to fill this whole post. But the other shows still need their spotlight, so I’ll have to hold back. 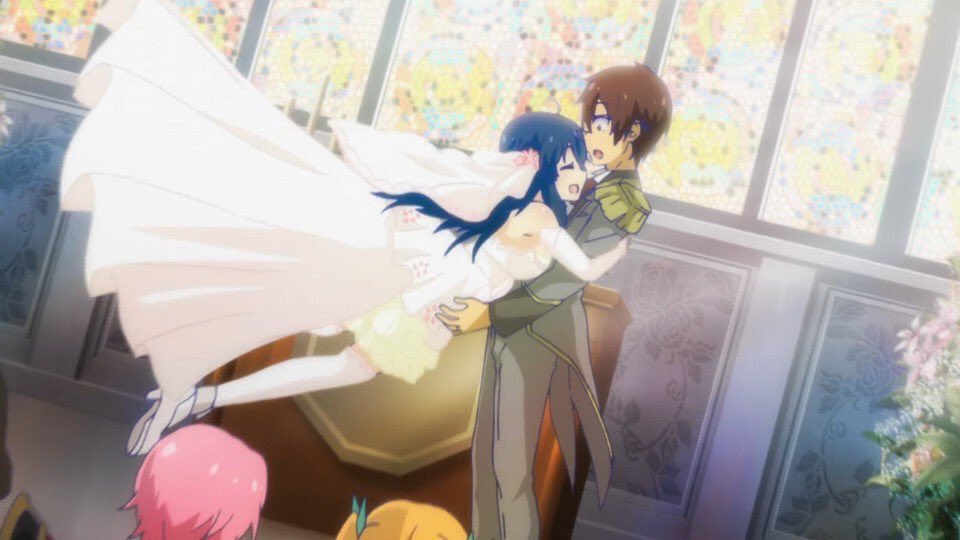 I thought Rusian’s account loss would affect the rest of the story more, but things get put back in place a bit too perfectly. The outplaying of the hacker felt corny, and while it gave him and Ako a reason for remarriage, things end too positively for this point in the story.

The club’s virtual world seems impregnable in a nice-guy Might Makes Right reversion to the old scheme of things. It helps prove the progress Rusian and Ako have made, but I want more conflict. I’ve loved putting myself in Rusians shoes insofar as it’s felt so hard to get Ako’s mind in the right place. The fact she identifies the real Rusian behind the text chat is sweet, but the success feels too solid. What’s the hook for next week?

More emphasis on how Nekohime has a reverse-harem was very welcome, though. It helps highlight how little of a harem our main cast are. Hopefully things will quickly go to hell in a virtual handbasket from now on. Else this might reach PlaMemo’s level of conflict-less romantic wish-fulfillment, and no-one wants that again.

Some amazing cinematography this week frames Maki’s struggle as it deserves to be shown. Pathetic fallacy is fantastically inverted; just as these Kiznaivers are bonded through their pain, getting on with life means dancing in the rain, getting drenched with sorrow with everyone else, and not just bottling it up yourself.

Nico continues to shine as a firm voice from an erratic personality (and fantastic dress sense). It’s the forwardness of her and everyone that make them go beyond their mission, knowing Maki isn’t saved yet, and the success of this mission is showered not in confetti, but in the rain.

It all continues the show’s war against groups of ‘types’ who never connect to with each other in anime because the story is only interested in wish-fulfillment and idealistic happiness. Trigger first cried out against ecchi with Kill la Kill; now they’re undoing the school club trope with everything they’ve got.

Deku’s ‘start line’ was at the hands of All Might. Bakugo’s starts by turning away from them. Now dEku’s the one everyone’s becoming friends with, and Bakugo can’t find his place. Is there any hope left for him actually becoming a hero?

It’s great that Deku’s achievement isn’t overblown though. It was emotionally epic, but it indeed relied upon it being a training exercise. Just as a real bomb could have exploded with his plan, Bakugo wouldn’t have stopped his attack had he been really out to kill him. Seeing the other heroes at work helps to keep us knowing that Deku has a long way to go. But Bakugo feels even further behind.

And what will happen when some real villains join the mix? Will Bakugo find a community he belongs to on the wrong side of the system?

Chinatsu’s growing up; she still feels the herbs they pick aren’t for her, but she has a great excitement in gathering them now. Just because we don’t like something doesn’t mean we can’t enjoy giving it to others. This mutual service everyone provides each other in Flying Witch is what boosts the natural idyllic most of all.

Case-in-point, a ghost who has hung around in a cafe simply because she still enjoys serving people. But like many beautiful creatures in nature, it doesn’t like to be seen and hides from human eyes. And some things of nature – frogs, ghosts – terrify those who aren’t as in touch with nature as others. But like a deerspotter blends into their environment, Makoto reveals the ghost through her own magic. The only way we can fully appreciate the magic of nature is by tapping into some magic of our own.

Once Chintasu’s more in touch with her witchy side, she’ll surely like those herbs much more.

Subaru’s personality changes might not have been for everyone, but I’ve only ever seen them as an insecurity; being unsure how to present himself, while always wanting to see Emilia smile. He tries to hard to be the perfect character his experiences have written the role for

Now we realise it’s that insecurity, which made him act unnatural, which made him a suspect in the mansion. And Emilia gains some autonomy; she saves him, not the other way round. Reinhart may have been the white knight Subaru can barely compete with, but Emilia has gained her own white knight qualities, giving comfort to Subaru so he opens up his heart. And the maids, knowing this display, begin to trust him.

Further proof that realism and depth of character is all about how characters interact with each other, not what they are or do on their own; it’s what they give and get out of everyone around them that counts. Rem and Ram made Subaru a paranoid workaholic, but Emilia brings out his sensitive side. A great step forward for defining the characters of our lead couple.

Mumei’s on the road to being made more human; Ikoma’s showing her what’s really worth fighting for. Her cute side can really come out now, and at this midpoint Ikoma declares his mission: to rid the world of Kabane not just for his sake, but for hers too.Regaining rice paddies is just an emblem of regaining the vitality of humanity itself.

But just as this is set in stone, the men that made Mumei a monster return. I’m certain that her noting she was never bitten by a Kabane is a sign that her strength did not arise like Ikoma’s did. And she knows so much about the Kabaneri – even the fact that they should be called that. She’s an outsider, and e can fear that the Hunters could be about to drag her back into the darkness Ikoma has been slowly rescuing her from.

The Young Master, Biba, looks set to be the villain of the piece.

That’s all for this week: see you next time!